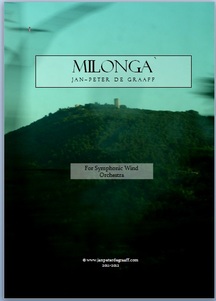 written for the Union Competition in November 2012

The Milonga is usually seen as the predecessor of the Argentinian Tango and a slow dance form, which was very pupular in the sixties of the 20th century, when Astor Piazzolla made several compositions which made use of the slow rythmic 3+3+2 pulse of the Milonga Campera, combined with modern Tango influences and influences of composers like Bach, Stravinsky and Bartòk. Something that most people don't know, is that the Milonga actually is a singing style (the word Milonga means sentence, or phrase) is that goes back to the early nineteenth century, with roots in Traditional Spanish, African and Native influences, which was usually sang at the Argentinian Countryside by slaves and servants at the plantations. At a certain point at the end of the nineteenth cenury, the Milonga became popular in the urban regions of Buenos Aires, where it became more and more a dancing style instead of a singing style, the tempi went up and more and more influences of american and spanish culture made the traditional Milonga Campera (rural) making place for a new style; the Milonga Urbana (urban) and not much later the Argentinian Tango. This style of music became also very popular in Europe and the United States around the 1920's, but the Argentinian raw, brutal and passionate way of dancing and music making made place for a European tempered style, but with the same driving energy; the Ballroom Tango. Many Composers of that time wrote a Tango in that period, and it even became popular in Modern ballet performances on pieces by Stravinsky, Shostakovich, Kurt Weill and Charles Ives.
After the Second World War, the Tango and the Milonga became almost forgotten and lost all of it's popularity from the early twentieth century, until one Argentinian Composer, Astor Piazzolla, made it revive again in the 1960's, 1970's and 1980's. His rediscovery of the Tango made him extremely popular, and he wrote beside his Tango's Concerto's, Theater works, Film music and Chamber music, with a Completely new approach to the Argentinian Tango, the Ballroom Tango and aspecially the Milonga Campera, which became a thread through all of his music, combined with infuences from western music (especcialy Bach, Stravinsky and Bartòk). Among his most popular pieces (Oblivion, Adios Noniño, Concerto del Angèl), the Traditional Milonga became the most important influence on his work. Nowadays, Piazzolla is considered as maybe the most important Argentinian composer ever lived.

Milonga` (pronounce as Milonga Acento) is a piece that takes the listener on a journey through the history of the Milonga (without being programmatic), starting on the Argentinian Countryside, around 1820, and ending with the first two bars of one I consider the most beautiful Milonga's composed; Oblivion. In between, the piece shifts from the old singing style and Spanish Flamenco, to the energetic Argentinian Tango of the 1920's and from enormous energetic orchestral gestures to small solistic passages and a double bass that has not-quite-a-solistic role...

The piece itself will be a musical journey in rythm, time, virtuosity and sound, taking the listener to what is, was and could have been...